The difference between quicklime and hydrated lime

Lime is divided into quicklime and hydrated lime. 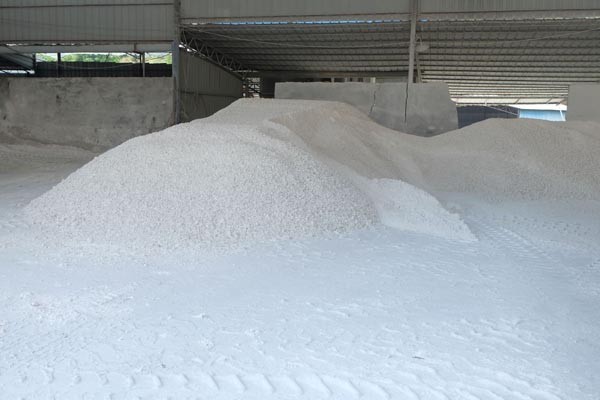 The main component of quicklime is calcium oxide (CaO), a white solid refractory and insoluble. The limestone with high content of (CaO) is calcined in a ventilated lime kiln to above 900°C. Quicklime is absorbent and can be used as a desiccant. It is commonly used to prevent the regain of debris.

Hydrated lime dissolves 1.56 grams (20°C) in one liter of water. Its saturated solution is called "lime water", which is alkaline and absorbs carbon dioxide in the air to precipitate calcium carbonate.


Conversion and hardening of quicklime and slaked lime

Lime emits a lot of heat when it is slaked, and its volume increases by 1 to 2.0 times. Lime with good calcination and high calcium oxide content will slake faster, and increase its heat and volume. Two methods are commonly used for hydrated lime on construction sites: hydrated lime slurry method and hydrated lime powder method.

In the lime slurry formed after quicklime slaked, the lime particles form a calcium hydroxide colloidal structure, the particles are extremely fine (particle size is about 1μm), the specific surface area is large (up to 10-30m2/g), and a thicker layer is adsorbed on the surface Water film can absorb a large amount of water, so it has a strong ability to retain water, that is, good water retention. Mixing it into cement mortar to form a mixed mortar can significantly improve the workability of the mortar.

Lime relies on dry crystallization and carbonization to harden. Because the carbon dioxide content in the air is low, and the hard shell of calcium carbonate formed after carbonization prevents carbon dioxide from penetrating into the interior, it also prevents moisture from evaporating outward, so hardening is slow, and the strength after hardening is not High, the 28d compressive strength of 1:3 lime mortar is only 0.2～0.5MPa. When in a humid environment, the water in the lime does not evaporate, carbon dioxide cannot penetrate, and the hardening will stop; plus calcium hydroxide is slightly soluble in water, and the hardened lime will dissolve and collapse when exposed to water. Therefore, lime should not be used in long-term humid and water-soaked environments.

Lime will evaporate a large amount of water during the hardening process, causing significant volume shrinkage and shrinkage cracks. Therefore, lime should not be used alone. Generally, it should be mixed with sand, paper tendons, hemp knives and other materials to reduce shrinkage, increase tensile strength, and save lime.

Lime has strong alkalinity. At room temperature, it can react with glassy activated silica or activated alumina to form a hydraulic product and cause cementation. Therefore, lime is also an important raw material in the building materials industry.


What are the uses of quicklime to make mature lime?

Lime is an important substance in our daily life or industrial use. The effect of quicklime is generally relatively small. Most of them require us to make hydrated lime from quicklime. This process is actually very simple. It is to add an appropriate amount of water, but after adding water, the quicklime It starts to react with water, and a lot of heat will be released during this process. Therefore, no matter whether you are operating around us or not, we must pay attention to controlling the danger, because hydrated lime is extremely corrosive and can easily damage our skin. We use it carefully.

When we use quicklime to make hydrated lime, all this will become very simple, and we can use these substances in all aspects, whether it is for interior decoration or other process improvements, the result will actually become Quite simply, this is the reason why many people like to use hydrated lime, because its stability is better, and the possible problems are clearer, and it will not produce some undesirable consequences, so this matter will become very important.

In some places, hydrated lime is made from quicklime and used in agriculture. Because of its strong presence, it can effectively kill some pests. Therefore, we prefer the existence of such substances, which have a more obvious effect and can also be used in agriculture. Used in all aspects, especially in some places where there is a demand for these. In fact, we are all familiar with their characteristics, but there may be some places that need to be paid attention to when using them, such as the characteristics of easy hardening, and more stirring is needed to prevent adhesion from affecting the use.